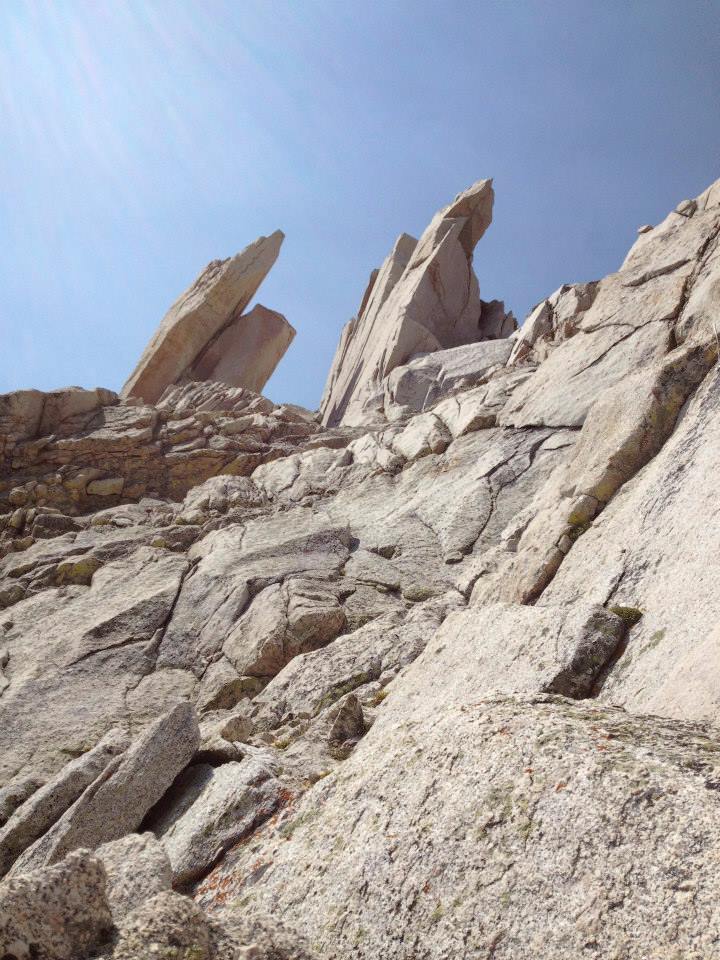 The body easily overcame the mind once again. What happened to needing less sleep as you get older? I slept way past the alarm. I set it for 3:30 thinking that if I got out and started hiking at 4:00pm; I’d have daylight when I hit the slabs to the ridge. This would give me better temps and more time in case I needed it. I drank a double shot and ate my 2 bear claws; poured Gatorade into one bottle and downed the rest. I grabbed my bullet pack filled mostly with water and headed out. Next time, I’ll remember to set my altimeter reference since following these when you are hundreds of feet off doesn’t really help your route-finding much.

I used Alois’ beta (I didn’t have the new edition of SuperTopo with LPP in it). I am really glad I had just that little bit. Personally, I think Alois intentionally sandbags this climb by telling us precious little about the different key bits you really need to know in order to get past the cruxes. I was profoundly grateful for that during and of course especially after the climb. Because this was indeed an adventure; a relentless-will-not-let-go-of-you-adventure right up until you hit solid ground at the Meysan Lakes. I suggest anyone heading up to do this climb use JUST this beta alone…and remember the first guys to do this didn’t climb 5.10, didn’t aid it and thought hobnail boots were the shizzle! Ok, they didn’t know what shizzle meant; but hey neither do I !

I headed up the trail higher than I should have and then cut back across a neat crossing to get over the creek. I did follow a faint trail that after a while I figured was man made only because no animal would have reason to head up or down that slab. I headed up and veered right which was a little harder than the normal way but it was also a bit more shaded I think. The bottom had one of the harder moves (water polished) to get up to ledges and ramps and then I motored up the slabs; ok ‘motoring’ is a relative term at this age.

As I neared the ridge I saw someone just finishing the cut in to the notch. I thought–“cool some company after all today”. I pushed on and when I hit the ridge, I realized there were two of them. I passed them when they roped up. After a while, I realized they probably weren’t going to make it that day since they weren’t exactly the ideal teammates; but hey maybe they did. Whenever I looked back; they were nowhere to be found. I went in front of them and here I began to peek in to the challenge of this day. I had to down climb 5.6 moves quite a ways where others could rappell or lower. Think of each tower, add the exposure of the ridge climbing and then add back in again all of the peek a boos around aretes as you try to find the reasonable way up or around. Now you have it; lots of exposure; all day long. I like down climbing and I’m pretty good at gauging what I can get up and still get down without too much worry. But I also have a tendency to shortcut routes by doing moves that might be harder. This is really dumb on new territory. I just naturally started up some crimps on an arete that was probably 10b and decided that I probably needed to dyno it and surely I’d get the likely jug up higher. When I realized that I only actually make moves like that about 60% of the time and today I was sans cord; I gingerly decided to climb down and take a more analytical approach. Just as I thought when I was in my teens; it is true that age doesn’t necessarily equal wisdom. I looked to the right and found a similarly difficult fist crack, which I knew I could do. Then it occurred to me; I’m missing something here. This route is 5.7 at best. Why am I contemplating harder moves?

Well the crux for me was not the part I thought it would be; the 5.7 moves were totally solid. The two pins were pretty cool looking and there is a purple camalot that looks to be a permanent fixture now. I probably won’t be doing much soloing like this but I did really enjoy it. I unlocked the two or three different keys to getting past and over the towers and then up to the summit. The summit is just never there; an unending procession of false summits leaves you worried that you’ll actually do this thing in a day. Finally, I was surprised to see that there was nothing higher. I enjoyed the summit view of Whitney and Russell and reading some of the comments in the summit register. Everyone seemed to find the climb to be more than they expected. It was a very BIG day and the descent was a big part of that mental crux. Another snickers bar (you might as well enjoy your food; I just can’t stomach any of the other ‘climbing’ bars anymore) and a hard-boiled egg, more water and down I go.

I followed the trail down the sand on the back from the summit. I made sure I passed the first couloir and started across and down to the second one. I followed a trail in glorious soft sand (yahoo! its easy from here!) and then halfway down I looked for the obvious way down and it cliffed out. No way to get down that. I must have started too soon after all. I cross talus and sand in to another gully and it too cliffs out. I cross a third and start down what looks like maybe a way down. Wow; no way- that is serious down climbing to another cliff that is overhanging. Ok so I’ll just put my shoes back on and climb around this ridge down here. Well those were 5.7 moves and cliff out above an overhanging chimney. Now I have to reverse that. Slowly and very careful; this is how people become statistics; on the descent. Ok further left is just too far and just has higher cliffs. So I have to reverse all of this and just look harder for a way down. None of the toes of these ridges seem to reach down. I change shoes again and retrace my steps. I see faint trails and logical traverses in the talus and finally I realize I had it right the first time but there is lots of steep slab downclimbing to connect ledges. I finally get all the way down to the talus. I’m going to be ok. Wow this peak just won’t let go of you. 10 feet from solid ground a leap over to a huge rock and of course if teeters down a foot when I land causing me to nearly face plant in to another rock. I recover. I slowly walk 10 more feet out and am so happy to be on solid ground. If fisherman can negotiate the way out from here; I’m going to be fine. Been waiting all day to feel this sense of security.

So the crux was more mental; so much exposure for so long; I wasn’t scared on the climbing because we all know that active fear just interferes with executing the moves you absolutely have to make and I was adamant about always having 3 points on the rock and hey it is only 5.5 to 5.7 but the long term feeling of having had enough time knowing that a slip here, a broken rock there, a too slippery crystal resulting in a popped foot; these would at best be broken legs if you landed with luck and at worst a part of the talus far down below. It kind of creeps up on you until you really want to just be a fisherman for a change! A fisherman gave me some filtered water and off I went down the trail to the car before dark. 14 hours in all.

This site uses Akismet to reduce spam. Learn how your comment data is processed.